Andrew Wilson raised from the hijack to 400,000, Robel Andemichael moved all in from the small blind for 700,000, and Wilson called with

, and Wilson won the pot with his queen kicker to eliminate Andemichael in sixth place.

The action is getting underway on the WPT Live Stream, which is on a 30-minute delay. Our live updates here will follow that same delay.

We will keep a link to the live stream in our header at the top of each post, or you can click here. And of course we will be posting the biggest hands right here on SHRPO.com. 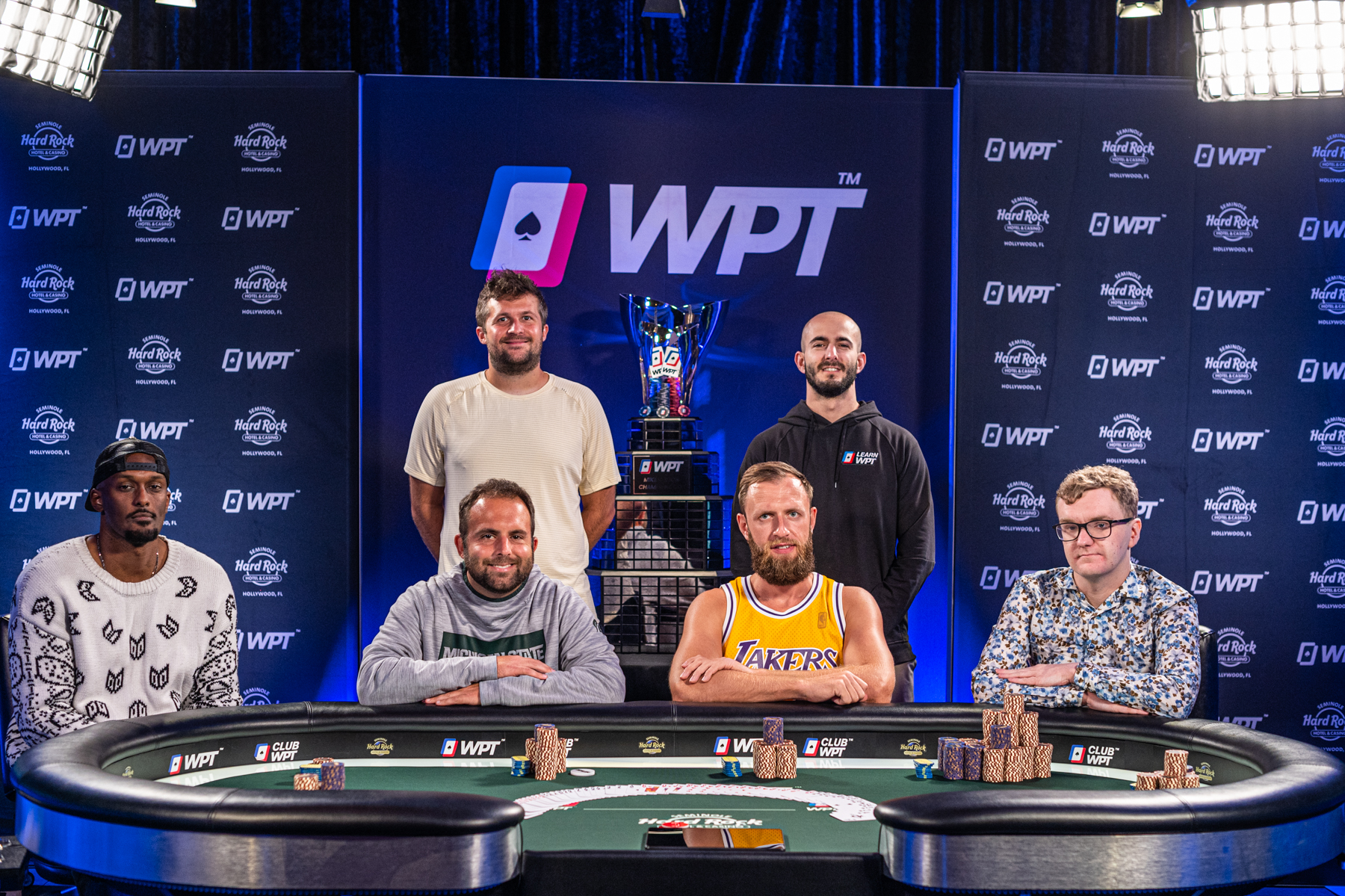 The final six players have been introduced to the audience, and they have taken their seats at the WPT Final Table. Here are their official chip counts:

The cards went in the air shortly before 2:00 pm EST, but our updates will be posted on a 30-minute delay so as not to spoil the WPT Live Stream. Fron 1,541 entries down to six players in contention for the 2022 WPT Rock ‘n’ Roll Poker Open Championship and they return this afternoon at 2 pm to play the final table on the live-stream stage.

Andrew Wilson leads the return, but it’s a talented group trying to chase him down.

We will be updating on a 30-minute delay with the WPT live stream to avoid spoilers.

The 2022 WPT Rock ‘n’ Roll Poker Open Championship drew 1,541 entries, the second biggest in our history, and the tournament is down to the last six players vying for the title.

They have a combined $18.3 million in career earnings, six WPT titles, a former WPT Player of the Year with Brian Altman, and another in contention this year in Chad Eveslage.

And Gediminas Uselis has a chance to make history; he is our defending champion and no one has ever won the same WPT event in back-to-back years.

Here’s a little look at the six members of our WPT RRPO Championship final table. Cards go in the air at 2 pm on Wednesday, and everyone is invited to come down to watch the live-stream action. From Fort Lauderdale, he has more than $6.7 in career earnings with two cashes over $1 million, including the WPT Five Diamond title last month. Eveslage has two Hollywood titles, the last in the 2021 Poker Showdown $25K High roller. From Delray Beach, he has $2.15 million in career earnings, including a PCA Main Event win in 2015. Kay is making his fourth WPT final table, with the most recent coming during the WPT Lucky Hearts Poker Open Championship in January. From Lithuania, he has $1.5 million in career earnings and is our defending champion. Uselis outlasted the biggest WPT RRPO Championship field in history to win the title and $778,000. He also has an MSPT Las Vegas victory and WSOP Online title. From Bolton in the UK, he has more than $600,000 in live poker earnings but that falls well shy of the online pro’s true win numbers. Wilson has several close calls for big wins in live events, including two WSOP runner-up finishes and fourth in an Aria High Roller this summer. From Boston MA, he has $6.7 million in career earnings with most of that coming from his three WPT victories. Altman became the first player to win the same WPT event twice; he won the 2015 WPT Lucky Hearts Poker Open Championship and again in 2020. He added his third WPT title last year in Tampa and owns seven career Hollywood major titles.

“A series saver, for sure,” said Charette afterward. “Florida poker is good to me.”

The win is Charette’s third SHRP major series trophy win. Most recently, he won a $600 Deep Stack Pot-Limit Omaha at the 2022 SHRPO, while his first came in the $5,000 Eight-Max No Limit Hold’em at the 2021 RRPO almost one year ago today.

“I was planning to play that $5K again,” admitted Charette. “I was the big blind on the first hand, so I was all in right away. I had 3-4 suited, was in against two better hands, flopped it, and just ran it up from there. I’ll take it.”

A five-way deal took place at the final table and Michael Newman was the chip leader, making him the official winner for $6,437.

A five-way deal was agreed upon at the final table, and the overwhelming chip leader was Frank Lagodich, making him the official winner for $133,241.

In the end, it was Afriat who emerged victorious, having the biggest stack at the time of a three-way chop, making him the official winner for $9,110.

This marked back-to-back days of trophy wins for Afriat, and his third SHRP major series trophy win, along with the aforementioned Event 33 and the 2014 WPT Seminole Hard Rock Poker Showdown. The three-time WPT champion has now amassed more than $4.5 million in career live tournament winnings according to the Hendon Mob poker database.